The Craig Tries to Build a Company in a Weekend

So I've signed up for Sacramento Startup Weekend, a weekend workshop/hack-a-thon with the pretty ridiculous goal of creating a viable start-up in the course of one 54-hour weekend. These events attrack a variety of talents, computer programmers (Not Me!, marketers (Kinda?), and wana-be entrepreneurs (Ding, Ding, Ding).

Everyone will pitch ideas tonight, the projects get voted on, and teams form around the winners and we are off the races. Sunday night we present what we've created and are judged for our efforts, fame and glory going to the winners. Should be fun eh?

The pitch I'm working on is based on my work related to my other site, and has to do with creating an app that will help fight promoters connect fighters with spaces on their cards. I'll have one minute to pitch the idea.

Well, That was Easy

Seriously, did someone at Human Right Campaign just push the Easy Button? A new ABC/WaPost poll has support for Gay Marriage up to 58% nationwide. That's up 28% in just eight years. Honestly, that's amazing. I don't know if there is anything close to that big and fast a swing in public opinion on a major issue of the day.

I could have sworn that those fighting for Gay Marriage were in for at least a decade of long hard slog to win nationally. This issue looked to be demographicly driven, with the young in favor and the old opposed. The Country was sure to change, but it would change slowly, as the young got old enough to vote and the old, er, "left" the Country. But this is a much faster change. This is people changing their minds.

Killer Dolphins on the Loose!

Who may or may not be armed (reports vary)

Email ThisBlogThis!Share to TwitterShare to FacebookShare to Pinterest
Labels: Dolphins


Pretty mind-blowing story from Joe Nocera about how Goldman Sacks rigged the IPO process of a tech company (EToys). The company sold stock at 20 bucks a share. It immediately went to 77 bucks a share (it was 1999, these sorts of things happened.) Good for people who got the stock at the IPO price, terrible for the company, which missed out on hundreds of millions of dollars.

This being America, a lawsuit followed and it turns out EToy's banker Goldman Sack not only deliberately set the stock price too low to give its preferred clients the bump, it took kickback (in the form of "commissions") of up to 50%. I.E. Goldman Sacks gets me stock I can buy at $20 that's really worth $78 and I give Goldman half of what I make. Great scam.

But why do companies stand for this? This is not little old ladies getting taken by Nigerian E-mails. These are real companies, with accountants and lawyers and Boards of Directors. How can such people get taken like this? Are they really that dumb? Is Goldman really the only game in town?

Email ThisBlogThis!Share to TwitterShare to FacebookShare to Pinterest
Labels: $$$$$

Learn Political Blogging!
Posted by Unknown at 6:56 PM No comments:

Email ThisBlogThis!Share to TwitterShare to FacebookShare to Pinterest
Labels: MetaBlogging 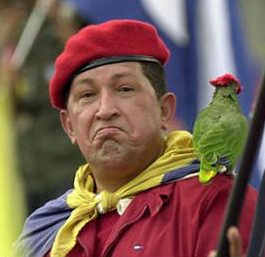 So Venezuelan leader Hugo Chavez has kicked. Not at all an expert on South American politics, but since when has that ever me from opining.

-First off, thanks to Chavez for illustrating what an actual Socialist looks like. His government seized all kinds of industries, oil, steel, and so on. He spent massive amounts of money on programs for the poor, built hospitals and schools and heaped all kinds of rhetorical abuse on capitalism. Obama hasn't done any of this. Obama is not a Socialist. Chavez is a Socialist.

-A good way to judge how someone stands on Chavez is to see what they call him. "Dictator" and "Strongman" seems to be the preferred title of the haters. His formal title was "President." He really was elected, so "dictator" seems an ill fit. But was pretty nasty in his suppression of opposition. I think we need a new category of leader (Putin in Russia is another) of guys who genuinely win elections, but cheat all the norms of democracy such a free press.

-On foreign policy, the funny thing about Chavez is that his famous antagonism was waged entirely at the level of rhetoric. He called W. "the devil" and railed against the US in general. But the US was Venezuela's main buyer of oil and still is, we were never going to draw guns on each other. Without all the bombast, Venezuela would join the large club of countries that just are, not allies, not enemies, just trading partners.

-The political scientist in me always finds Battles of Succession to be fascinating. Who rules? The chosen successor? Rivals within the movement? Long shut-out opposition?
Posted by Unknown at 9:19 AM No comments:

Email ThisBlogThis!Share to TwitterShare to FacebookShare to Pinterest
Labels: Obit, The Refreshing Drink of the Revolution

Mitt Romney and the Winklevi

So lots of people having been having lots of fun with the Mitt Romney interview on Fox News Sunday, where the man gets to relive his loss and generally revel in his loserdom. What strikes me is how enjoyable it is to see Romney lose. It is the same joy to had from watching the Winklevoss twins get beat in The Social Network. To see men who have every advantage in life -money, connections, jawline get got. Both Romney and the Winklevi have the casual arrogance of never ever having anything go wrong for them in their life. I imagine righties got the same joy watching John Kerry lose in 2004.

But just the fact that Romney can say things like "What I said is not what I believe." like its some kind of useful excuse is just too perfect. Romney doesn't believe anything that he says. We all know that. Everyone who voted for him knows that. Mitt Romney will say whatever he needs to say, full stop. Its one of many reasons that he isn't President now.

Some Flogging Molly for your Weekend:

Email ThisBlogThis!Share to TwitterShare to FacebookShare to Pinterest
Labels: Music

Liz Cheney, daughter of Dick and very much his heir, has moved to Wyoming, surrounded by rumors of a possible Senate run.

Unlike the Darth Vader story, the children of Darth Cheney will not redeem him. Liz Cheney has been a vigorous defender of the worst parts of her Father's regime (which she served in), including torture, Iraq and so on. Liz does not offer a new, improved version of the ideology that ruined the beginning of the 21st Century.

The path Liz is on is a return to power, not a return to the light.
Posted by The Craig at 12:08 PM No comments:

The War for Better Beer Continues

Budweiser is getting sued for watering down their beer.

How could they tell?
Posted by The Craig at 1:48 PM No comments: